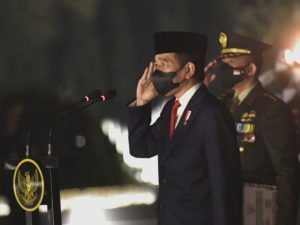 In observance of the 76th Anniversary of Indonesian Independence, President Joko “Jokowi” Widodo led a ceremony to pay tribute to the nation’s heroes at the Kalibata Heroes Cemetery, on Tuesday (17/08/2021), at 00.00 Western Indonesian Time.

At the ceremony, President Jokowi as the inspector of the ceremony, expressed his highest respect to 10,190 heroes who had served and sacrificed their lives for the country.

On the occasion, the President also paid tribute to unsung heroes from all corners of Indonesia and prayed that God the Almighty grants them a decent place.

“My utmost respect for all heroes for their sincere and sacred sacrifices as well as their devotion to the country and nation and for their struggle to defend the country,” said the President.

“We promise that their struggle is our struggle and their path of struggle is also our path. Our pray, may their soul rest in peace and God the Almighty grant them a beautiful place,” the President added.