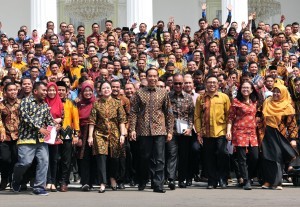 President Jokowi in a group photo with participants of PKH Resource Jamboree, at the State Palace, Jakarta, Thursday (13/12). (Photo by: Jay/Public Relations Division)

The Government will focus on the development of human resources starting next year after it focuses on infrastructure development in the past four years.

I entrusted the Minister to carry out large-scale development in human resources in the future. I have also ordered to select PKH facilitators to be sent to study abroad, the President said in his remarks at the PKH Resource Jamboree, at the State Palace, Jakarta, Thursday (13/12).

The PKH facilitators who sent abroad, according to the President, can continue their education, join a training, see and compare Indonesia with other countries.

President Jokowi asserted that all parties must play a role in order to open their respective insights so that they have a high enthusiasm to build the state. We must meet the target of 15.6 million PKH recipients in 2020. We must have the same enthusiasm to alleviate poverty, said the President.

In the meantime, Minister of Social Affairs Agus Gumiwang said that the implementation of PKH could not be separated from the role of 39,700 facilitators spread across 34 provinces in the country. The Jamboree held is also intended to increase the capacity of PKH facilitators, he added. (RAH/JAY/ES)