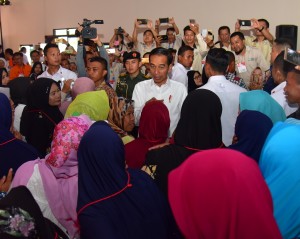 President Joko Jokowi Widodo reminded the recipients of Aspiring Family Program (PKH) that they should prioritize their children education.

“(Education) will make our children smarter and healthier than we are,” President Jokowi said during distribution of the PKH at the Mandala Multipurpose Building, Garut, West Java, Saturday (19/1).

“This country needs smart and healthy children, the President said, adding that the PKH recipients should also pay attention to their children’s nutrition.

President Jokowi added that the PKH also aims to improve the family economy as well as  income and can be used for working capital.

The President further said that the PKH is a medium for the Government to reduce inequality as well as to reduce the number of lower-income households.

Also present during the event were Minister of Social Affairs Agus Gumiwang Kartasasmita, Minister of Public Works and Public Housing Basuki Hadimuljono and Coordinator of Special Staff to the President Teten Masduki.