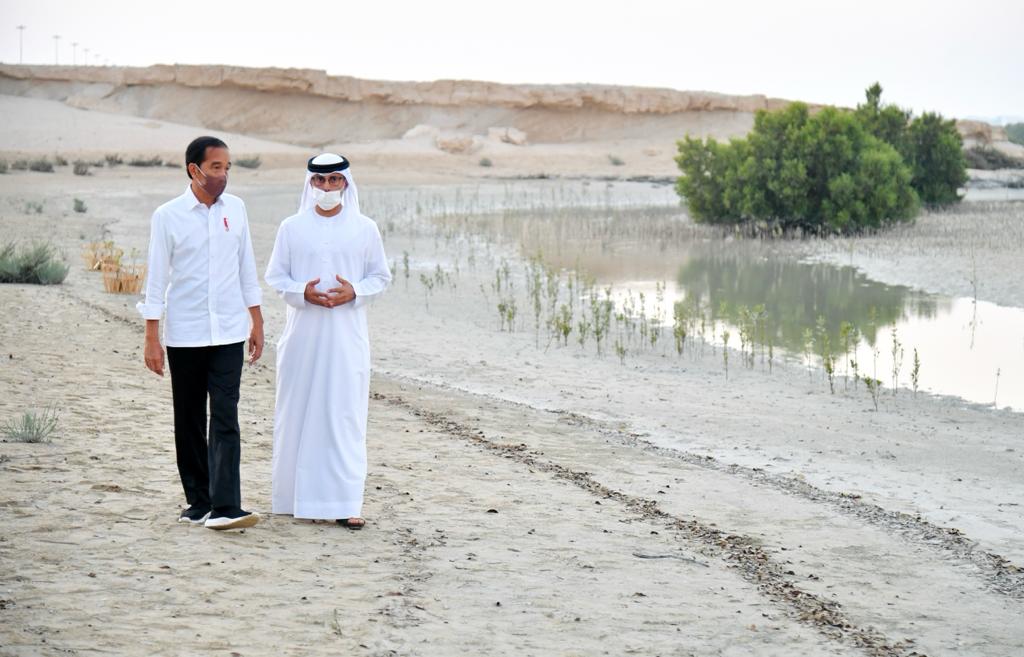 On his way to the park, the President and his entourage passed through Joko Widodo Street and President Joko Widodo Mosque and saw the construction of the new Indonesian Embassy in Abu Dhabi from the vehicle he rode in.

As the President arrived at the park at around 17.15 local time, he was welcomed with UAE Minister of Energy and Infrastructure Suhail Al Mazrouei and Director General of Jubail Island Investment Company Mounir Haidar.

After listening to the explanation about the area, the President took a 300-meter walk across a boardwalk to see the mangroves.

For the record, the main attraction of Jubail Mangrove Park is the boardwalk, which has three different routes with the longest route of 2 kilometers, the medium route of 1.6 kilometers, and the shortest route of 1 kilometer.

Jubail Mangrove Park is also Abu Dhabi’s first mangrove forest park with an area of 120,000 square meters and has been opened for the public since Thursday, 30 January 2020.

As quoted from its official website, this attraction was made to improve awareness, appreciation, and understanding about the important ecological functions of mangrove habitat, which includes protecting Abu Dhabi’s coastline and supporting biodiversity.

Before leaving Jubail Mangrove Park, the President planted trees near the location where the Crown Prince of Abu Dhabi did.

According to Minister of Foreign Affairs Retno Marsudi in her press statement delivered at Emirates Palace Hotel after the visit, mangrove is one of the issues discussed by leaders of both countries during the bilateral meeting at Al-Shatie Palace.

Retno also pointed out that both leaders have agreed to strengthen cooperation in mangrove sector, including in research, adding that mangrove plays a crucial role in climate change and Indonesia is home to the largest mangrove forest in the world.