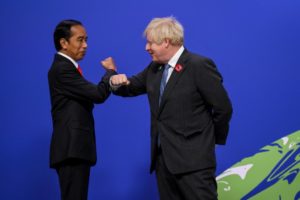 President Joko “Jokowi” Widodo on Monday (01/11) held a bilateral meeting with British Prime Minister Boris Johnson on the sidelines of the COP26 World Leader Summit in the Scottish city of Glasgow.

On the meeting, President Jokowi and PM Johnson agreed to enhance bilateral cooperation between the two countries, especially in economic sector.

“I would like to focus our relationship on green economy cooperation. Green investment and affordable technology are the keys to the economic transition,” the President said.

Meanwhile, PM Johnson expressed the UK’s interest in investing in Indonesia with a priority to support Indonesia’s economic transition. To President Jokowi, he stated the importance of support in the forms of green investment, multilateral development banks, and affordable green technology.

The UK will prepare export credits that can be used to support economic transition cooperation with Indonesia, PM Johnson said, adding that the bilateral meeting between the two leaders will be followed up with a technical meeting to make a list of prioritized cooperation and the funding model.

PM Johnson’s commitment is consistent with the commitment of investors as delivered in the CEOs Forum which took place this morning. (BPMI SETPRES/UN) (GWH/MUR)