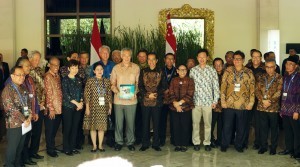 In the midst of global economic uncertainty, economic cooperation has become the focus of our countries, President Jokowi said in a press statement with Singapore Prime Minister Lee Hsien Long after the Annual Leaders Retreat, at Laguna Resort, Nusa Dua, Bali, Thursday (11/10)

The Annual Leaders Retreat agreed the swap and repo cooperation between central bank Bank Indonesia and the Monetary Authority of Singapore worth US$ 10 billion. In addition, in the Retreat, both Leaders signed 3 MoUs in which 2 of the 3 MoUs are aimed to encourage economic and financial cooperation, namely the promotion and protection of investment, while another MoU is cooperation on financial technology.

This agreement, continued President Jokowi, will also be a reference for future investment agreements.

President Jokowi explained that he and PM Lee also agreed to encourage digital economic cooperation between Indonesia and Singapore. Nongsa Digital Park in Batam, which was launched earlier this year, continues to grow and currently there are 56 technology and digital companies occupy the place, the President said.

This cooperation will make Batam a digital bridge in Indonesia, President Jokowi continued, adding that digital and e-commerce cooperation and training need to be intensified, including the development of financial technology and industry 4.0.

In addition, President Jokowi said that he and PM Lee also discussed the development of the Kendal Industrial Park, which was inaugurated in 2016. According to the President, there are currently 43 Singaporean investors who invest in the area. I hope similar cooperation can be done in other special economic regions in Indonesia, said the President.

On tourism issue, President Jokowi and PM Lee welcomed various cooperation between the two countries, such as the opening of flight route between Singapore-Toba, Singapore-Belitung, and the addition of cruise ship destinations from Singapore to Surabaya, North Bali, Jakarta, Kuala Tanjung, and Bintan.

I hope we can promote this cooperation and attract more tourists to visit 10 Indonesias new tourist destination, President Jokowi said. Besides economic and tourism cooperation, President Jokowi and PM Lee also discussed efforts to increase ASEAN cooperation. As two founding countries of ASEAN, according to the President, Indonesia and Singapore have an obligation to continue strengthen ASEANs unity and centrality. We must strengthen ASEANs contribution to peace, stability, prosperity in the region and the world, including in the development of the Indo-Pacific cooperation concept, President Jokowi concluded. (IMF-WB/ES Coverage Team) (STU/EP/Naster)