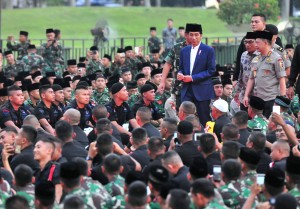 President Joko Jokowi Widodo on Thursday (16/5) expressed gratitude to the Indonesian National Defense Forces (TNI) and the Indonesian National Police (Polri) personnel for their hard work and dedication so that the simultaneous Legislative and Presidential Elections on 17 April run in a democratic, honest, fair, safe and peaceful manner.

I really appreciate the hard work, President Jokowi said at his remarks at the Iftar dinner with family members of the TNI/Polri and the public, at the National Monument (Monas) Field, Jakarta.

According to the President, political stability and security are absolute conditions for the development of the country. Both will not materialize if the TNI and Polri are not solid and united, he said.

Therefore, President Jokowi invited the TNI and Polri personnel to continue embracing all elements of society to drive away ideologies that violate the values of Pancasila state ideology and the constitution which could threaten the stability and integrity of the Unitary State of the Republic of Indonesia.