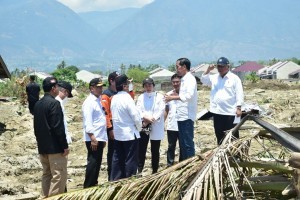 President Joko Jokowi Widodo said that post-quake relief efforts in Palu and Central Sulawesi Province are progressing in accordance with the plan.

The President added that searching and rescuing victims as well as clearing debris are underway in other disaster-affected areas while the wounded victims were transported to Makassar (South Sulawesi) to get proper medical treatment.

During the visit, President Jokowi found that 40 percent of the electricity supply has been restored thanks to medium and small generators while 500 operators from state-owned electricity company PLN started restoring the electricity system that was paralyzed after the quake.

Meanwhile, the supply of fuel and logistics, according to the President, is currently being distributed to several quake-affected areas, although the President admitted that several disaster areas have not been reached.

“I have ordered (that the fuel and logistics) to be distributed to those places, President Jokowi said.

The President expressed his hope that the post-quake relief will be completed as soon as possible and economic activity can be restored.

I have instructed the Governor to encourage people to open their shops and the market and start the economic activity,” the President concluded.