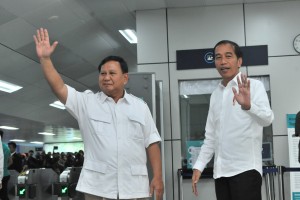 President Joko Jokowi Widodo has finally met with his challenger in the 2019 Presidential Election Prabowo Subianto for the first time since the election.

“The meeting with Bapak Prabowo Subianto this morning is a meeting with a best friend,” President Jokowi said at Senayan MRT Station on Saturday (13/07), after riding MRT with Prabowo from Lebak Bulus MRT Station.

The President added that he is very happy to meet Prabowo after the election, while expressing hope that supporters of the two camps can unite as fellow countrymen.

“There is no more 01, no more 02, no more cebong, no more kampret. There should be Garuda, Garuda Pancasila,” the President said, adding that unity is pivotal to develop the nation and to face a very tough global competition.

“I agree, there is no more cebong, no more kampret,” Prabowo said, referring to terms used by their supporters to insult each other during the election period.