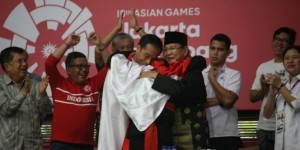 Pencak Silat once again serves as a gold mine for Indonesia at the 2018 Asian Games.

The first additional gold medal was clinched by Hanifan Yudani Kusumah with a score of 3-2, defeated his opponent Thai Linh Nguyen from Vietnam.

After being medalled, Hanifan celebrated in an unusual way. Wrapped in Red and White flag, the medalist came to VVIP seats, where President Jokowi and Chairman of the Indonesian Pencak Silat Association (IPSI) Prabowo Subianto sat.

Hanifan kissed the hands of President Jokowi and Prabowo, he then extended his arms to embrace the two leaders for a group hug. The audience immediately applauded the extraordinary moment when two national figures shared a group hug with the gold medalist of the Asian Games.

Besides Hanifan, the other athlete presenting gold to Indonesia in Pencak Silat was a female athlete, Wewey Wita, who defeated his opponent Thi Them Tran from Vietnam in the B women`s 50-55kg weight class.

The 25-year-old athlete has clinched the 14th gold medal in Pencak Silat event of the Asian Games 2018 after outclassing Thi Then Tran with a score of 5-0.

Wewey came to VVIP seats and shook hands with President Jokowi, Vice President Jusuf Kalla, and Prabowo. She then celebrated by running around the field while unfurling the Red and White flag.

With the addition of two gold medals, Indonesia secured its position in the Asian Games medal tally with 30 gold medals, 22 silver medals and 35 bronze medals.