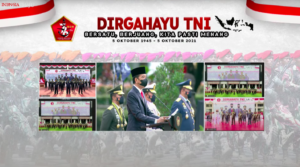 President Joko “Jokowi” Widodo has extended his gratitude to the Indonesian National Defense Forces (TNI) for its role in COVID-19 handling.

“Our success in tackling COVID-19 cannot be separated from the significant role of the TNI that always carry out every task professionally,” the President said during a ceremony to commemorate the 76th TNI Day at the Merdeka Palace, Jakarta, Tuesday (05/10).

According to the President, the fight against COVID-19 is like a prolonged war that drains energy, mind, and fighting spirit. The war also requires vigilance, synergy, and the use of science and technology.

“Individual capabilities, unit capabilities, science and technology, and defense equipment have been used and deployed [by the TNI] in carrying out every task,” the President said.

“The people, the State and the Nation also express the highest appreciation to all personnel of the TNI who have always been protecting the nation’s sovereignty, safeguarding the territorial integrity of the Unitary State of the Republic of Indonesia based on the Pancasila and the 1945 Constitution, and protecting the Indonesia as a nation from all threats and disturbances,” the President remarked. (SLN/UN) (RI/LW)