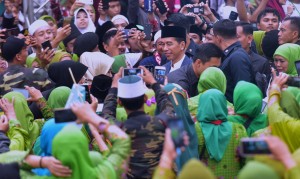 President Jokowi answers reporters questions after attending the 73rd Anniversary of Muslimat NU and mass prayer for the safety of the nation and state, at Gelora Bung Karno Stadium, Central Jakarta, Sunday (27/1). (Photo by: Rahmat/Public Relations).

President Joko Jokowi Widodo expressed appreciation for the Anti Hoax Declaration delivered by members of the Muslimat Nahdlatul Ulama (NU) at the 73rd Anniversary of Muslimat NU and mass prayer for the safety of the nation and state at Gelora Bung Karno Stadium, Central Jakarta, Sunday (27/1).

This is a great movement for our country, President Jokowi said, adding that the movement is a response due to rampant hoaxes in the country

Previously, the President said that the Muslimat NU is a large organization, proven by the attendance of its members who filled the Gelora Bung Karno Stadium.

We need moderate Islam to be echoed, just like what Mrs. Khofifah said, that Islam is full of tolerance and mutual respect. That is the spirit conveyed by Muslimat NU, President Jokowi said.

In the meantime, Chairperson of the Muslimat NU Khofifah Indar Parawansa expressed her gratitude to President Jokowi for his response to the Anti Hoaxes Declaration. We have anti-hoaxes, anti-slander, and anti-gossip (ghibah) declarations. If the anti-hoaxes sanction is regulated in the ITE Law, anti-gossip will have spiritual sanctions, Khofifah said.

Khofifah added that the Muslimat NU hopes that all elements of society will build themselves productively, have a constructive and positive mindset to promote Indonesia to the next level. (EN/RAH/ES)