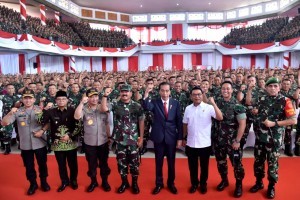 In the era of the industrial revolution 4.0. which is currently underway, President Joko Jokowi Widodo appreciates the real work of the village supervisory non-commissioned personnel (Babinsa) who immediately met the communities and worked on the ground. The President cited an example that the personnnel built bridges and houses in the village, and taught members of Jambis remote indigenous communities, the Anak Dalam nomadic tribe.

I really appreciate such field activities and actions, for example, building a suspension bridge, teaching people in remote areas. These are concrete things that we can do in villages, the President said in his remarks to Babinsa at Pinang Masak University Hall, Jambi University, Sunday (16/12).

The President went on to say that currently, global, political and economic landscape has changed very rapidly as an impact of the existence of information disclosure through the internet and social media.

What does it mean? In the future there will be very rapid changes. We are aware that there are Artificial Intelligence, advance robotic, 3D printing. In the financial sector there are bitcoin and cryptocurrency. Then there is virtual reality, President Jokowi said.

We must anticipate it. Do not let those changes have a bad impact on our society. Imported cultures, ideologies will enter the villages. We cannot prevent it, there is no limit. Everyone can access it now with their gadget. Any ideology can enter without us being able to filter it, the President said.

In the beginning of his remarks, the President ensured that the Babinsa personnel had received rising operational support this year and he asked about its disbursement.

The Indonesian National Defense Forces (TNI) Commander had said earlier that the operational support for Babinsa has been disbursed, hasnt it? asked the President. Yes, it has, replied the Babinsa personnel.

Not only that, President Jokowi then explained the rationale behind the rise of operational support. The President mentioned that he often heard aspirations and inputs every time he went to the region.

Why did we raise it significantly? Because every time I go to the village, the region, someone told me: Pak President, the operational support is still lacking compared to that of public order officers (Babinkamtibmas), he said.

As for the TNI performance allowance, initially, it will be disbursed in July. However, a convoluted procedure makes this delayed.

The President ensured that this allowance would be received by all TNI personnel, including the Babinsa next week.

We have actually pushed for it to be disbursed in July. However, due to financial procedures, it is delayed. The TNI Commander has said that you will receive it next week, the President said.

The Babinsa personnel present, the TNI Commander further explained, have made many achievements, including finding fertilizer formulations that were beneficial to farmers, managed to collect homemade weapons without violence, helping to teach in schools in rural areas, and together with Babinkamtibmas thwarted violent robbery.

Such achievements must be maintained, and even continue to be improved, Hadi concluded. (Bureau of Press, Media, and Information/EN)