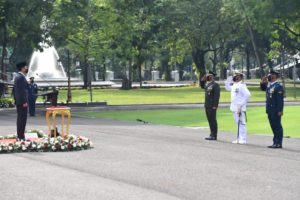 President Jokowi at the 76th anniversary ceremony of the Indonesian National Defense Forces at the Merdeka Palace in Jakarta, Tuesday (05/10) morning. (Photo by: BPMI of Presidential Secretariat/Lukas)

During the 76th anniversary ceremony of the Indonesian National Defense Forces (TNI) at Merdeka Palace in Jakarta on Tuesday (05/10), President Joko “Jokowi” Widodo presented awards to personnel of the TNI for their great service in advancing and developing the TNI.

During the ceremony, the awards were conferred to three representatives of the awarded TNI personnel, including:

The President began the ceremony by dedicating a moment of silence for heroes who have passed, followed by Second Lieutenant of Pilot Corps Gilang Bella Mukti who led the recital of Sapta Marga, seven principles of the TNI.

The President also took time to greet TNI personnel representatives who attended the ceremony through video conference from different places, both at home and abroad.

Among those whom the President greeted were TNI personnel who were deployed in Lebanon, in Ndana and Rote islands in East Nusa Tenggara province, at the KRI Multatuli-561 command ship in the seas of North Natuna, in Entikong border area in West Kalimantan province, and at Indrapura Field Hospital in Surabaya city. (SLN/UN) (DH/EP)