President Jokowi: Price Increase in Agricultural Products Must be Enjoyed by Farmers 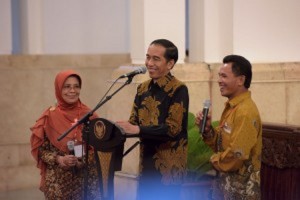 President Jokowi had a dialog with the farmer who awarded Adhi Karya Pangan, at the State Palace, Jakarta, on Monday (21/12)

President Joko Jokowi Widodo said though he already increased the budget of Ministry of Agriculture by 100 percent, the President will wait for the result in 2-3 years, whether the given budget gives an outcome or not.

Will imported food decrease? Will the production, such as rice, corn or soy bean increase? I will see. I do not want to be hasty, asking for the result already meanwhile the budget was just allocated last year. I will not do that. It is a continuous, medium and long term program, President Jokowi said when delivering a remarks on the awarding of Adhi Karya Pangan, at the State Palace, Jakarta, on Monday (21/12) afternoon.

So far, the President added, the import is decreasing. Corn and other food products also drop, so do the meat and shallot. We could see the number. We could see it, but I want to see in another 2-3 years. The number will increase more clearly. It is because we want to focus on agricultural sector, the President said.

However, the President reminded to make the prosperity of the farmers in line with the increase of production. President Jokowi admitted that he sees the rate every month. Alhamdulillah, I see the rate is increasing every month. Thus, what the Minister has delivered that the price of unhulled rice is higher than last year, or increase by more than 1,000, is such a big leap, the President explained while reminding people to be careful because once the price rises too high, the consumers will complaint.

The President asserted that the person who will get the benefit from the increase of rices price is the farmers, not the third, fourth, or fifth person who stand in-between.

Do not let the farmers work really hard from the morning to the evening to another morning, but the person who get the benefit is the middleman. I told the Minister of Agriculture to ensure the price increase is enjoyed by the farmers, Prsident Jokowi said.

On that occasion, President Jokowi also mentioned our tendency to import food products. I always wondering why are we keep importing while we could produce it. Why we must import? President Jokowi said.

It turns out that the import allows us to pay later. That is the answer. Meanwhile, our demand on corn is very high.

Ladies and Gentlemen, if we can produce it by ourselves, our balance of trade will improve. We do not rely on other countries. The corn is highly needed to feed the livestocks, President Jokowi said.

Previously, the Minister of Agriculture Amran Sulaiman said that food is the Governments priority. Thus, the President increases the budget by 100 percent compared to last  year. It is the biggest budget in history, the Minister said.

According to Nawacita, nine programs of President Jokowi and Vice President Jusuf Kallas administration, the Minister said, we must improve our food independent through several attempts that have been done. However, the Minister added, we are now facing the El Nino which intensity is higher than the one in 2008.