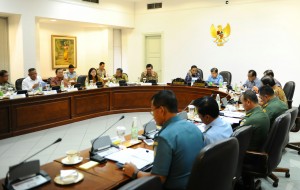 In his remarks, President Jokowi said that in order to enhance national defense forces, Indonesia must to meet the needs of an integrated alutsista, be it in Navy, Army, an Air Forces, and in the National Police.

According to the President, nearly all countries are now competing to improve their defense technology.

We are also trying to establish a more solid  posture of TNI, as well as a more comprehensive and modern TNI, President Jokowi said.

In relations to that, President Jokowi gave 4 (four) instructions, as follows:

Firstly, the procurement of alustista must be in line with TNI needs that was mentioned in the 2010-2014 Minimum Essential Force Document, the 2015-2019 Defense Strategic Plan (Renstra), and masterplan on defense industry developed by the Defense Industry Policy Committee (KKIP).

Secondly, I must underline that the procurement process must be conducted with accountability and transparency principles, President Jokowi firmly said.

Thirdly, the procurement of alustista is implemented to materialize the Indonesias independence of defense.

Fourthly, the President added, the procurement of alustista strengthen the operational integration between intra-dimension weaponry system and this, the President said, is really important.

If it is not integrated, it (weaponry system) will runs separately, President Jokowi said.

The President asserted that the four instructions are related to a plan of buying VVI helicopter and probably other the main tools in Indonesias  weaponry system.