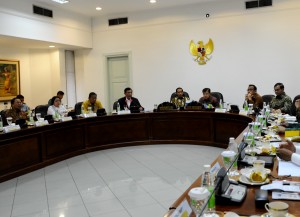 President Joko Jokowi Widodo said that every time he meets with heads of state, heads of government, presidents or prime ministers, issues related to capitalism, terrorism, and the Islamic State of Iraqi and Syria (ISIS) have always become major topics during the discussions.

According to the President, there are many things that are discussed in those forums; yet, he added, almost all approaches are those related to security and law enforcement approaches.

In fact, the President added, in addition to hard approaches (security and law enforcement), soft approaches can also be taken, be it in the form of religious approaches or cultural approaches.

This is what we have to do consistently, firmly, and in a sustainable way so when we face those threats, we can handle them really well and we also hope that the current favorable situation can always be well-maintained, the President said.

The President also asserted that the Government would continue to be present to give a sense of security for all the citizens.

He went on to say that the Government would increase surveillance and security measures in public places, places of worship, seaports, bus stations, and other places.