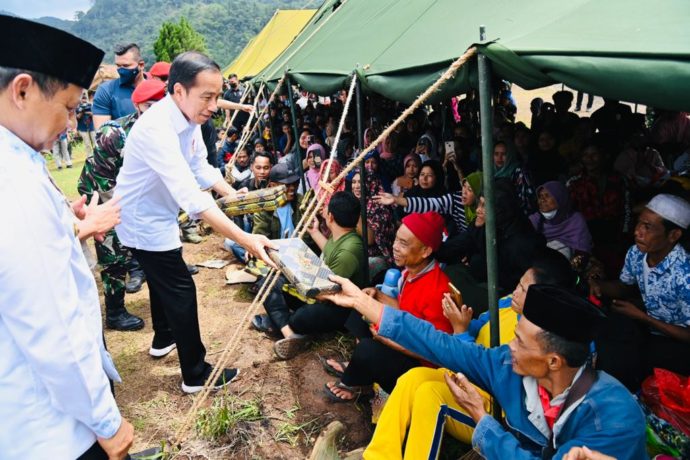 On that occasion, the President talked to refugees as well as provided assistance to those affected by the 5.6 magnitude earthquake.

“We have sarongs and mukenas for you. Everyone will have it,” the President said to the refugees at Cijedil village shelter, Cugenang district, Cianjur regency.

The President also asked the refugees to be patient in facing the natural disaster. The President explained that the Government would immediately provide assistance to refugees whose houses were damaged.

“Everyone should be patient. The Government will immediately provide assistance. The new houses can be constructed by communities, or by the Government. The construction will be carried out immediately once the situation gets back to normal,” the President stated.

In the meantime, Ade Supriadi, Head of community unit (RW) 02 in Cijedil village, said that he was very grateful for President Jokowi’s visit to the region.

“I am very, very grateful that President can visit my neighborhood,” Ade said.

Ade also said that President Jokowi provided assistance of Rp5 million to all community members in order to meet their daily needs.

“The allocation is for the needs of all residents of RW 02, be it for buying shampoo, soap, toothpaste and other needs,” Ade said.

“We really hope for the reconstruction of the damaged houses because 90 percent of the thousands of houses around here were heavily damaged,” he remarked.