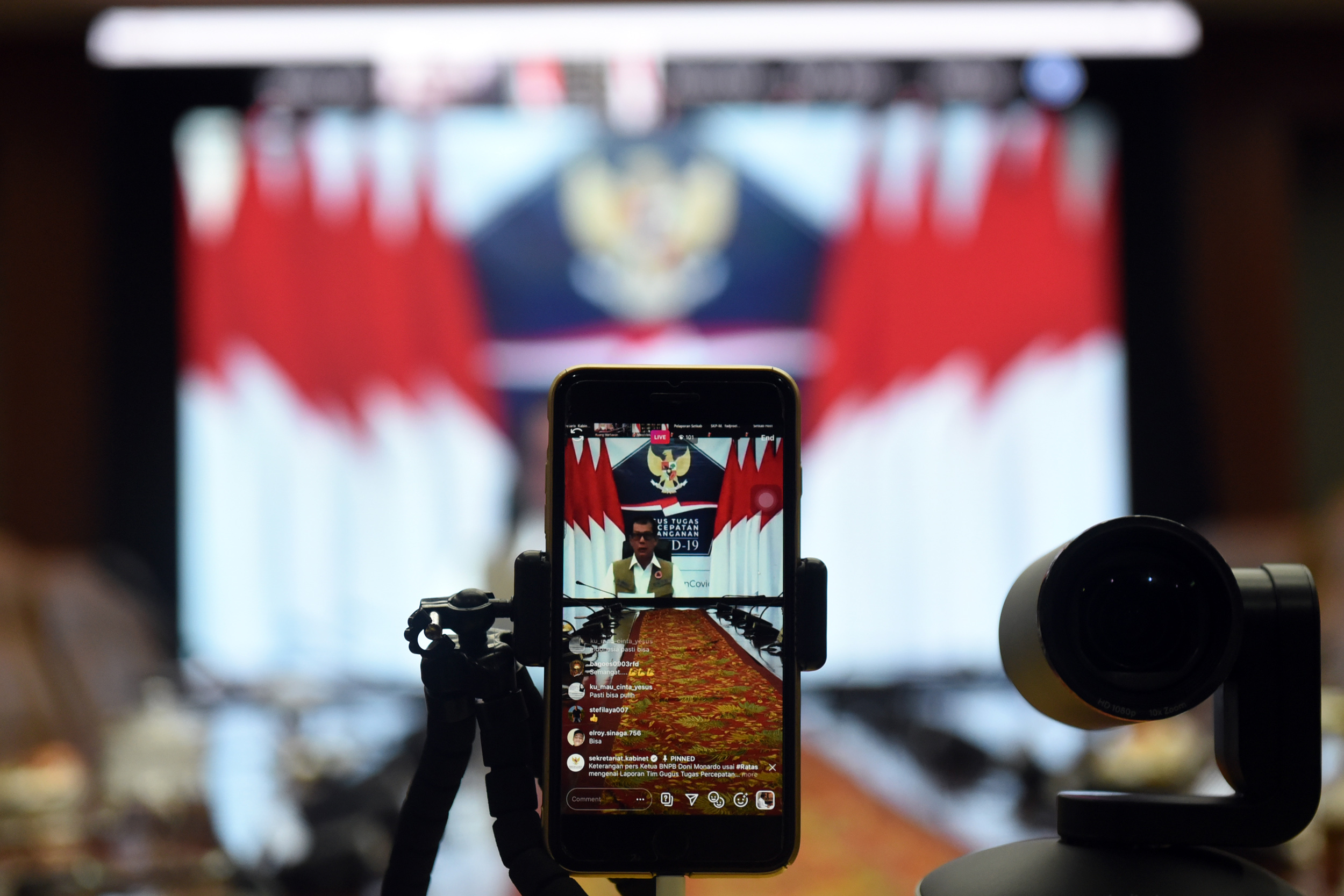 During a limited meeting on the Report of Task Force for the Acceleration of COVID-19 Mitigation (20/4), President Jokowi stated his directives to the Task Force, as follow:

Since the PSBB imposition in Greater Jakarta, the Task Force has been monitoring its implementation. “There are positive things, but there are also some that need improvements, such as office and factory activities which make a number of modes of transportation are still being filled by people,” Doni said at a press conference after the limited meeting (20/4).

Although there have also been requests from a number of parties to limit or even cancel modes of transportation, Doni continued, Ministry of Transportation has not been able to fulfill the request.

“The reason is that most workers are those who work in sectors that cannot be left out, such as hospital staff, servants in public facilities, so they still have to work,” the Task Force Head said.

Therefore, he asked all components, especially leaders, officials, and managers who manage employee resources to truly comply with the government provisions on PSBB.

Thus, according to Doni, if there are still a number of offices and factories that are not in accordance with the provisions established by the health protocol, several steps will be taken, be it in the form of warning, reprimand, or even penalty.

“As referred to in Article 93 of Law Number 6 of 2018, if an event endangers public health, it will subject to fines and criminal penalty,” he said.

Some recommendations made during the previous meeting are installing CCTV in factories as well as conducting inspections on offices.

Second, the President asked doctors and medical personnel to be optimally protected.

“We do not want doctors to die because of non-optimal protection. Therefore, good cooperation is needed with all parties so that doctors and medical personnel can really get better protection,” Doni said.

According to him, the utilization of medical-based unicorns is proven effective to help a no face to face meeting between patients and doctors. “There are already more than 20 unicorns and this turns out to be very effective. There are one million people who have taken advantage of the chat board facilities and then 320 thousand people via telemedicine alone,” Doni said.

Minister of Health, Doni said, has also reported to the President that in the last few days, consultations relating to COVID-19 have decreased.

“We will continue to provide the best Personal Protective Equipment (PPE) supports to doctors and we have also urged the Indonesian Doctors Association (IDI) so that both those in the service area for COVID-19 patients and non-COVID-19 patients, must use PPE,” he said

Related to referral hospital management, the Head of BNPB said, the hospital will be prioritized for COVID-19 patients with severe symptoms. “Patients with mild symptoms will be given guidance to stay at home, while the one with moderate symptoms will be treated at some emergency hospital facilities, such as Wisma Atlet,” Doni added.

To support doctors and nurses, Indonesia has more than 25,000 volunteers registered. “We have also asked the Governors, Regents, and Mayors to integrate these volunteers into an organizational structure which is directly under the control of the Task Force at the provincial, district, city levels in order to optimize their energy in priority interests,” Doni stated.

Third, the President underlined the importance of mutual cooperation.

Doni stated that international institutions also appreciate the presence of volunteers in the country. “This can be our strong social capital,” he said adding that the mutual cooperation which the Task Force also utilized using the community-based pentahelix method, should be able to spearhead, especially in mitigation.

“Also Minister of Health has reported to the President that the referral hospital, both those that were determined by the Central Government and those that had been proposed by the regional governments would still be in their interests,” he said.

Fourth, the President stated the importance of sample testing, which was also strengthened by the Vice President by urging the implementation of massive testing.

To date, he said, one of the obstacles faced is the struggle to obtain PCR test reagents. “But, yesterday, we have received assistance from Ministry of SOEs, the Minister gave his support, also the flag carrier Garuda Indonesia’s Managing Director, assisted by the Indonesian Ambassador to South Korea Umar Hadi who immediately responded so that in less than 24 hours the PCR reagents originating from South Korea has arrived in the country,” he said, adding that all the reagents sent from South Korea have been distributed to all laboratories around Jakarta, including several other provinces.

Fifth, on matters related to information disclosure. According to Doni, the President emphasized the need for providing information regarding data of COVID-19 occurrences from all regions.

Doni also stated that all the suspected patients who passed away will be buried with COVID-19 protocols. “We learned that a few weeks ago, one of our officials passed away and the official was buried using regular standard. After a few days, it turned out that the official was confirmed COVID-19 positive,” he said.

Sixth, the President instructed the logistics should run smoothly, especially to face the upcoming holy month of Ramadan.

“Also, this morning, the social assistance has started to be distributed to as many as 1.2 million (families) in Jakarta, the other regions will follow,” Doni said.

“It is important to boost the patients with positive information, to raise their optimism so that they can increase body immunity in order to recover,” Doni stated.

At the end of his statement, he said that the Task Force and Ministry of Health have acquired around one million PPE from South Korea. (TGH/MAY/EN)