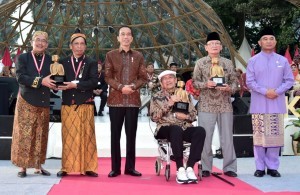 President Joko Jokowi Widodo said that in the complexity of thought and ideas, the potential for conflict is also getting higher. However, according to the President, opportunities for tolerance and collaboration synergy are also always wide open.

To deal with those complexities, the President asked people to maintain Indonesian civilization and tolerance, as well as openness to interact.

We must maintain the interaction to be full of tolerance and enthusiasm for sharing, not dominated by enthusiasm for contesting, President Jokowi said in his remarks on the 2018 Indonesian Culturale Congress at Ministry of Education and Culture, Jakarta, Sunday (9 / 12).

On that occasion, the President expressed his gratitude to the cultural activists who have maintained and cultivated Indonesian culture.

According to the President, what is needed now is a stage of tolerant interaction. He cited the example of a smart city that provides inclusive public space as a stage of tolerance and a space for expression, or a place to express academic freedom such as religious and educational institutions.

To realize this, President Jokowi continued, the state must be present as a facilitator who supports expression of tolerance. The role of the country includes providing resource support, reforming the cultural bureaucratic that is more flexible along with the changing times, and facilitating community involvement through cultural and arts councils, and so on.

However, no matter how big the role of the Government, it will not be possible without the spaces of expression and spaces of tolerance in the community, said President Jokowi.

The President added that the space is not only outside the body, but also inside the body and thoughts of each individual because expression filled with tolerance requires space in the heart and mind.

We need space in our heart and mind to open, to share, and to develop ourselves. Only by this, we can speed up our effort to realize the advanced Indonesia, said the President.

President Jokowi also invited all parties to continue preserve, strengthen and develop the Indonesian culture amid the growing technological development and the increasing penetration of other cultures that enter Indonesia.

The President also expressed his belief that Indonesia has its own uniqueness with a very long history compared to other countries, thus it is rooted strongly in the heart of Indonesian people.

He went on to say that the development of transportation technology and information makes the cultural interactions between groups and nations becomes more dense and complex.

However, President Jokowi stressed, the most important is to raise public awareness to achieve prosperity.