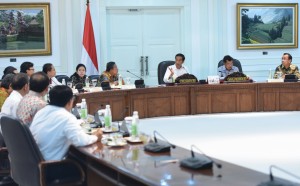 President Joko Jokowi Widodo has pushed for the acceleration of the development of tourism sector in 2016.

According to the President, national economic growth on tourism sector has promoted the development of medium-sized and small-sized business, as well as creative industry, and  will also create new jobs.

President Jokowi added that speed and breakthrough in the regulation and works on the ground are needed so we will be able to feel the results soon.

For the development of Toba Lake, the President particularlly instructed related sides to strengthen access connectivity, both related to seaport, airport, or road.

I noticed that the Coordinating Minister for Maritime Affairs, Minister Public Works and Public Housing, and Minister of Tourism visited Toba Lake two or three weeks ago. We hope there will be the follow up on the ground soon, the President said.

The President added that branding for the marketing, international standard service, art and cultural attractions with good choreography, as well as attractive classy design must be prepared.

In the beginning of his remarks, President Jokowi said that tourism sector has continued to develop as national economic booster, and the Government has already seen several tourism destination spots on the ground.

Based on the data from Minister of Tourism, foreign tourist visit to Indonesia in 2015 increased significantly and reached 10.4 million people. Meanwhile, the estimated foreign exchange income from tourism sector is Rp 144 trillion.