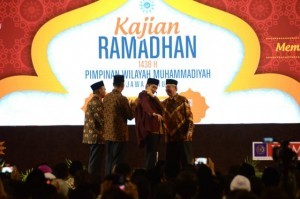 President Joko Jokowi Widodo asserted that persecution is very much against the principles of state law. Therefore, he has ordered the Indonesian National Police (Polri) Chief to take firm actions against the perpetrators of the persecution. “No such things should be allowed,” President Jokowi told reporters after delivering a remarks at the University of Muhammadiyah Malang, Malang, East Java, Saturday (3/7) afternoon.

President Jokowi affirmed that neither any individual, groups, nor organizations can take the law into their own hands. Let alone, on behalf of law enforcement. “There is no, and will be no such thing. Indonesia will be a barbaric country if something like this is allowed,” the President said.

Therefore, President Jokowi asked that any individuals, groups, or community organizations put an end to the persecution immediately. “Stop it and let the Polri handle the issue,” the President concluded. (GUN/DNS/ES) (MUR/YM/Naster).