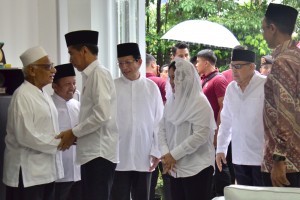 The President added that Quraish Shihab gave him a lot of insights. “He offered many suggestions on what the nation has to do in the framework of moderate Islam,” President Jokowi said.

In the meantime, Quraish Shihab said that his conversation with President Jokowi was in line with the main activities conducted by the Center for Qur’an Studies that focus on upholding moderate Islam.

“Alhamdulillah, praise be to Allah, the President paid a lot of attention (to what I said). The world today needs moderation, not violence, Quraish concluded. (DND/DNS/ES)