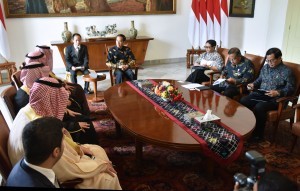 “The First message is that Indonesia, as a fellow Muslim country, always invites Saudi Arabia to spread peace and tolerance as well as to solve the conflict through peaceful settlement,” Retno told the reporters after the meeting.

The second point, according to Minister Retno, is strengthening cooperation in the economy, trade sector, and investment, and cooperation among Muslim-majority countries to unleash economic potential of the countries.

“Therefore, the President expects the increasing economic cooperation between Indonesia and Saudi Arabia, in line with the fact that Indonesia continuously encourages concrete cooperation among the members of the OIC (Organization of Islamic Cooperation), Retno said.

The third point, Retno continued, President Jokowi brought the issue related to the protection for Indonesian citizens who live and work in Saudi Arabia.

According to Retno, after paying a courtesy call to President Jokowi, Adel bin Ahmed Al-Jubeir on Tuesday (23/10) will attend a bilateral meeting with Retno.

The Indonesian Minister of Foreign Affairs  explained that the bilateral meeting has been scheduled after King Salman’s visit to Indonesia last year. Retno further said that Indonesia and Saudi Arabia have agreed to improve bilateral communication from SOM (Senior Officials Meeting) Level to Foreign Minister Level.

“(The meeting) has actually been scheduled after King Salman’s visit to Indonesia. The President does not talk about details; he gives direction and framework related to Indonesia-Saudi Arabia relations. The details will be discussed by the two Foreign Ministers,” Retno concluded.