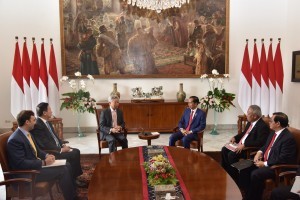 The closed-door meeting is the second meeting since President Jokowi received the AIIB delegates for the very first time on 12th March 2018.

In the prior meeting on March, President Jokowi delivered Indonesias commitment to carry on cooperation with the AIIB. Indonesia declared its support and intention to join the AIIB, the President added.

Based on the AIIBs record on Indonesia, the cooperation between Indonesia and AIIB has been established years ago. So far, the Bank supports three infrastructure projects in Indonesia with an estimated value of more than US$6 billion. (GUN/OJI/ES) (RAS/MMB/Naster)