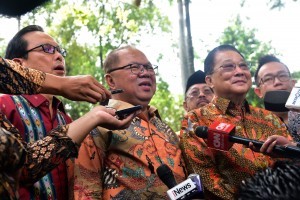 Based on the reason, President Jokowi emphasizing the need of opening new jobs so that the existing workforce can be absorbed.

So, the economy can grow and we will overcome the current (economic) gap, Vice Chairman of the Chinese Indonesian Association (INTI) Budi Santoso Tanuwibowo said after received by President Jokowi at the Merdeka Palace, Jakarta, Wednesday (5/12).

The opening of new jobs, according to Budi, can be carried out in any sector including agriculture, especially horticulture and fruits. If this sector can be developed, in the future Indonesia will become a fruit exporter nation.

The President asked us to further increase our investment and should not be worried about some issues, for example political security, and others. We are sure that if we unite, this country can become a big country, Budi said.

According to Budi, the INTI members have their respective professions, and every profession has its own responsibilities. He believed that if each of them carries out their responsibility properly, this country would surely be safe.

Regarding political conditions in Indonesia, Budi said that compared to other countries, our country is still fine. This country was not easily and instantly established. It had gone through struggle, fights, and conflicts, Budi said and added that eventually its people had agreed to choose the principles of Pancasila as their guidance.

Also present on the meeting with President Jokowi were Minister of State Secretary Pratikno, Cabinet Secretary Pramono Anung, Chairman of the INTI Teddy Sudianto, and Secretary General of the INTI Ulung Rusman. (RAH/ES)