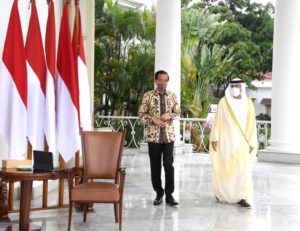 According to Coordinating Minister for Maritime Affairs and Investment Luhut Binsar Pandjaitan, the delegates came to convey a special invitation for the President from the UAE Crown Prince Sheikh Mohammad bin Zayed Al Nahyan.

The invitation is to witness the signing of a trade agreement between Abu Dhabi and Indonesia which is slated to be held at the end of March.

“For almost an hour, President Jokowi received Minister Suhail, as a special envoy of Prince Mohammed bin Zayed, to extend an invitation for the President to witness the signing of the trade agreement between Abu Dhabi and Indonesia at the end of this month,” Luhut said.

In addition, the meeting also discussed follow-up investments between Indonesia and Abu Dhabi through the Indonesian Investment Authority.

Luhut went on to say that the President has instructed him to resolve a number of matters related to the cooperation between the two countries.

“We are currently identifying the issues one by one. Thus, the President ordered me to conduct a meeting today so that we can solve all pending issues,” he said.

Regarding the Nusantara Capital City (IKN), the delegates also expressed the readiness of the UAE Government to participate in the investment of IKN development.

“We will meet Minister of PUPR and Head of Bappenas to finalize the details so that they can invest in IKN development immediately. The meeting was very fruitful and essential. We are delighted with the progress,” Luhut said.