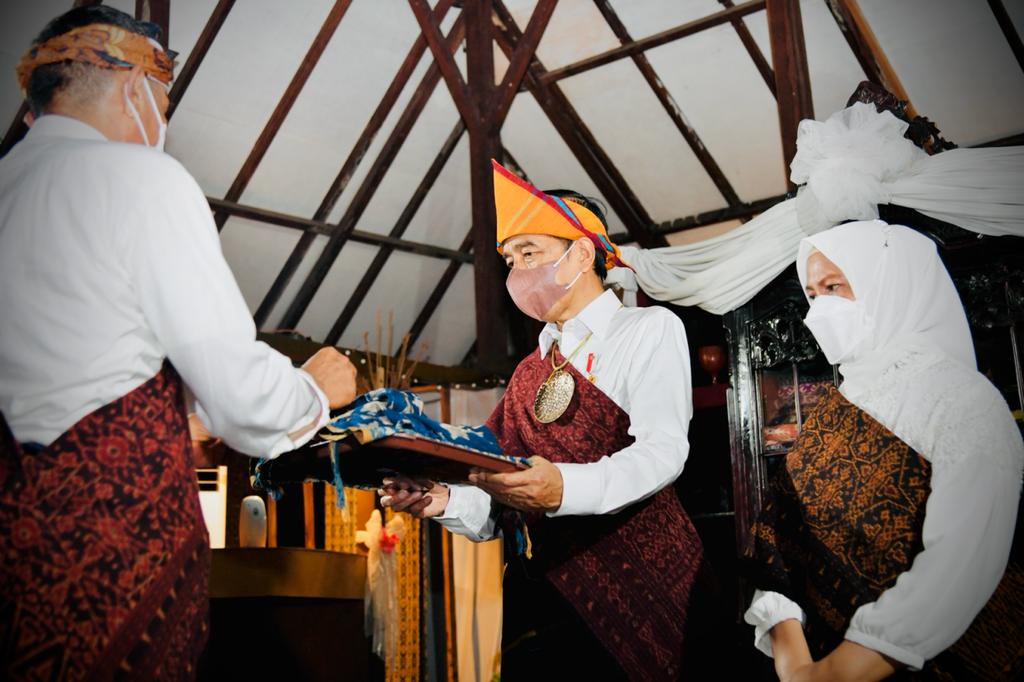 “I would like to express my deepest gratitude to the people of East Nusa Tenggara, especially the people of Ende who have warmly welcomed me and Ibu Iriana as well as the entire entourage from the beginning until now,” the President stated.

Upon arrival, the President and First Lady Ibu Iriana Jokowi were welcomed by Woge Dance, symbolizing the victory of the war, at the Weaving House. The dancers carrying spears and machetes danced to music called Nggo Lamba which is usually played to welcome guests and at traditional events.

After receiving the title, the President and Ibu Iriana also observed Regent of Ende circling the Tubu Kanga (main area of traditional rituals) four times which means union with nature (earth, water, fire, and wind). The two of them also took the time to see and greet the weaving craftspeople in their workspaces.

Before visiting the Weaving House, the President and Ibu Iriana also had the opportunity to visit First President Soekarno’s House of Exile and Reflection Park. The President stated that the warmth of the Ende people inspired Bung Karno (Soekarno’s nickname) in formulating the country’s ideology, Pancasila.

“I think this is why Bung Karno’s thoughts and reflections on Pancasila started from Ende. Because I feel that he is in a warm community that is always close to the leader. Once again, I express my deepest gratitude to the people of Ende,” he remarked.

Based on Ministry of Education, Culture, Research, and Technology’s website, Soekarno was exiled in Ende from 1934 to 1938. In the midst of his exile under the breadfruit tree in Ende, Soekarno explored the idea of ​​the state foundation which was later formulated by the Committee of Nine into Pancasila in 1945.

Soekarno was then transferred from Ende to Bengkulu on October 18, 1938. After Indonesia’s independence, in 1951, Soekarno visited Ende for the first time after becoming the Indonesia’s first president. (FID/UN) (FI/HD)