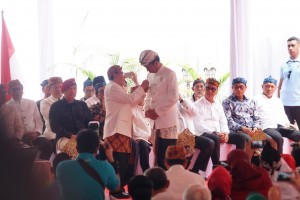 “It is a great honor for me. The (West Java) Governor said that I have been to Bandung more than 30 times,” the President said, adding that he has traveled more than 1,500 times to West Java.

“I live in Bogor, so every day I go to Jakarta early in the morning, and come back to West Java at midnight. So I think I have traveled more than 1,500 times to West Java,” President Jokowi said, adding that the hospitality of West Java residents make him feel at home.

“I would like to express my appreciation for the hospitality of the people here in Bandung. The people in Bandung and West Java give me a warm welcome,” the President said.

In the meantime, President Jokowi said that he is open to any input related to the development in West Java. He went on to say that the Government has built Kertajati Airport and Bocimi (Bogor-Ciawi-Sukabumi) Toll Road which will be partially opened next week.

“I have told (West Java) Governor that the Central Government, the provincial government and the local governments will work hand in hand to develop this province,” the President explained.

Furthermore, President added that Indonesia is a big country with 263 million populations, 34 provinces, 514 municipalities/cities and 17 thousand islands. Therefore, Indonesian people should maintain their unity and harmony, especially in the upcoming elections.

In the occasion, President Jokowi also mentioned Ir. Juanda, a national figure from west Java who has a significant role in unifying the nation.”We know that almost every province and city in Indonesia names its main road with Ir. Juanda to honor him. The airport in East Java is also named after him,” the President said.