President Jokowi Receives IHPS, LHP Semester I of 2020 from BPK 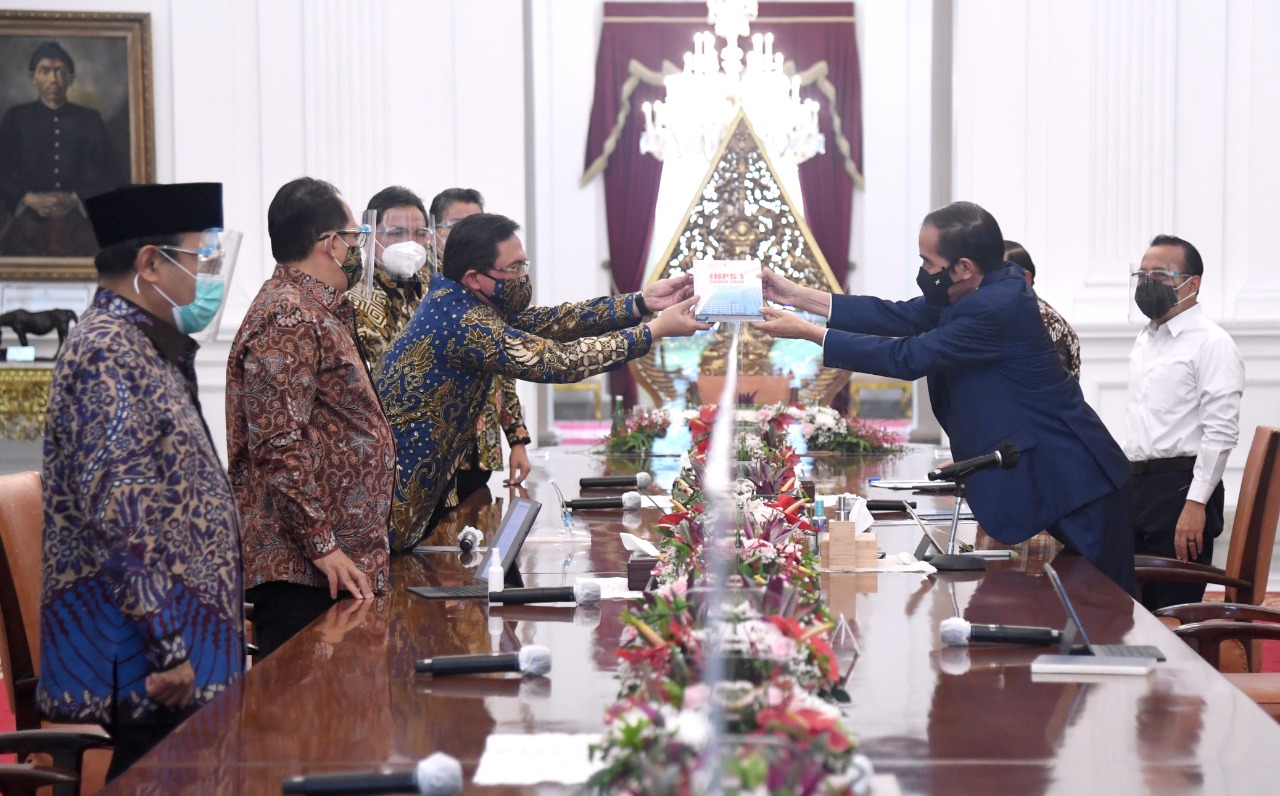 President Jokowi receives top officials and members of the Supreme Audit Agency of the Republic of Indonesia (BPK RI) at the Merdeka Palace, Jakarta, Wednesday (11/11). (Photo by: BPMI Setpres)

President Joko “Jokowi” Widodo expressed appreciation for the performance of the Supreme Audit Agency (BPK) in completing the Audit Result Statement (IHPS) and the Audit Result Reports (LHP) of  Semester I of 2020 on time even amid difficult situations due to the COVID-19 pandemic.

“I would like to express my gratitude and appreciation to the Supreme Audit Agency for completing the IHPS and LHP of Semester I of 2020 on time,” the President said during a meeting with top officials and members of the BPK RI at the Merdeka Palace, Jakarta, Wednesday (11/11).

In the meantime, Chairman of the BPK Agung Firman Sampurna reported that the IHPS comprises 680 examination results with 634 of which are financial audit results with the rest including 7 performance audit reports and 39 audit result reports with specific objectives.

“As many as 85 LKKLs or accounting for 97 percent received a WTP (unqualified) opinion in 2019.  This figure has exceeded the target of WTP opinion on the main targets of governance development and bureaucratic reform set in the 2015-2019 National Mid-Term Development Plan (RPJMN),” Agung said.

“We have also examined 1 Foreign Loan and Grant Report, namely the 2019 Indonesia Infrastructure Finance Development Trust Fund (IIFDTF) financial report run by the Directorate General of Financing and Risk Management with an Unqualified opinion as well,” he said.

The Agency has also examined 541 of 542 Regional Government Financial Reports (LKPD) with only the Waropen Regency government in Papua has not submitted their financial reports.

“This achievement has exceeded the target of regional financial performance in strengthening local government governance or the program to increase the financial capacity of provincial, regency and city governments as set in the 2015-2019 RPJMN, which stood at 85 percent, 60 percent, 65 percent respectively in 2019,” he said.

President Jokowi also expressed hope that this trend will get better every year, adding that a number of problems and findings will be used as a basis for correcting and improving the performance of ministries and local governments.

“We will submit the reports to Minister of Home Affairs. The point is that we want to take corrective steps to create accountability for public financial management beneficial to the community,” he said, adding that the Government has recorded inputs that are very important for future improvement. (BPMI / UN)