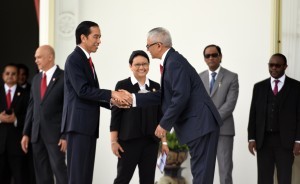 President Joko Jokowi Widodo, on Thursday (12/1) at the Merdeka Palace, received Letters of Credentials from eight Ambassadors Extraordinary and Plenipotentiary (LBPP) to mark the start of their official duties in Indonesia.

The eight Ambassadors are as follows:

Speaking after the ceremony, Minister of Foreign Affairs Retno Marsudi, who accompanied the President, said that the Ambassadors consider that Indonesia plays a very important role for the region and the world.

Retno added that some of them specifically expressed high appreciation for Indonesias role in ASEAN and in humanitarian issue, including the issue of Rakhine State in Myanmar.

The Ambassadors also expressed their appreciation to Indonesias economic growth that is relatively higher than the average global economic growth and they hope to boost economic cooperation with Indonesia. For example, Bangladesh specifically expressed its strong wishes to boost economic cooperation with Indonesia because Bangladesh has a population of almost 170 million. Last year, Indonesia exported 50 train coaches and this year, we are aiming to increase our train coaches to the country, the Minister said, adding that Bangladesh also needs coal in a big amount to support its industries.

With France, Retno said that both sides talked about collaboration between the two countries in the context of Palestine conflicts.  She added that Indonesia supports Frances initiative to hold the International Peace Conference. I myself attended the Conference in June last year and on the 15th of January, there will be the second meeting but I cannot attend the meeting so Deputy Minister of Foreign Affairs will attend the meeting. So, Indonesia and France and other countries can support the International Peace Conference in the Palestine-Israel context, the Minister said.

With the United States, Retno said that President Jokowi said he had phoned US President-elect Donald Trump and both leaders also talked about US commitment to continue comprehensive cooperation with Indonesia. Specifically, Ambassador Donovan also appreciated Indonesias role both in ASEAN and in the world, Retno said.

With Mauritius, both countries talked about the issue of IORA (Indian Ocean Rim Association) because Mauritius is the current head of the IORA Secretariat and Mauritius really supports the IORA Summit to be chaired by Indonesia.

With Rwanda, both countries talked about trade issue. According to Retno, in 2016, Indonesias trade volume with Rwanda rose 16 times.  So this is a big potential that we hope to manage. Its population is relatively small, only 12 million people, but if we see the trend in the trade, its very promising, Retno said.

During the Credential ceremony, one by one, the Ambassador arrived at front yard of the Merdeka Palace and the national anthems of their respective countries performed by a marching band by the Presidential Security Detail (Paspampres).

Afterwards, the President received Letters of Credentials from those Ambassadors sequentially at the Credential Room at the Merdeka Palace. The meeting was continued with a veranda talk at the back of the Merdeka Palace. During the talk, President Jokowi was accompanied by Minister of Foreign Affairs Retno Marsudi. The meeting ended at 11 am with a joint photo session with the eight Ambassadors with the accompaniment of national anthem Indonesia Raya.