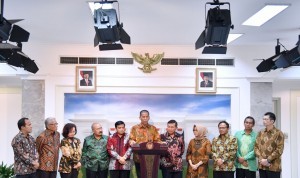 Photo caption: Saldi Isra, Chairman of the Selection Team of KPU and Bawaslu member candidates for the period of 2017-2022, along with members of the Team, deliver a press conference at the Presidential Office, Jakarta, Wednesday (1/2).

The Selection Team of member candidates of the General Election Commission (KPU) and the Election Supervisory Agency (Bawaslu) led by Saldi Isra on Wednesday (1/2) at the Presidential Office met with President Joko Jokowi Widodo to report names of 24 candidates for KPU members and Bawaslu members for the period of 2017-2022.

According to Saldi, the Team, which was given a task from the President since October 2016 until the end of January 2017, has completed all stages in accordance with the Law (Number 15 of 2011) on the Implementation of Elections.

We comprehensively asses the candidates based on five main criteria namely independence, integrity, ability on the management of elections, leadership, and health state. From all candidates that have applied, these are the best candidates based on those five criteria, which are determined by the Law, Saldi said to reporters after the meeting.