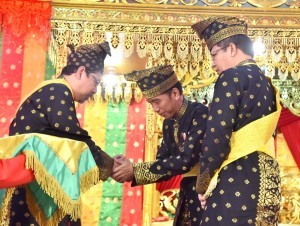 The title means a dignitary leader and a mandate holder who has protected the people.

The meaning of this honorary title is similar to the oath of the President of the Republic of Indonesia, which is to serve the people and the nation, said the President, adding that a President has been mandated to guard and fulfill the aims of Indonesian independence and to preserve Indonesian culture as stated in the 1945 Constitution.

In the meantime, Chairman of the Riau LAM Datuk Seri Syahril Abubakar said that the title is conferred to the President based on his policies that brought positive benefits to the Riau people. Those include the policies to tackle forest fires, the Governments policy on Rokan oil block, and the Governments policy to carry out agrarian reforms in Riau Abubakar said.

Riau has suffered from haze for around 17 years but then the President implemented policies so there is no more haze in the province. Thank God, haze no longer hits Riau, he added.
Regarding the policy to tackle forest and land fires, President Jokowi said that it was the hard work and cooperation between the Government and the people, while for the policy on the Rokan oil block in Riau, he said that the management of the countrys second-biggest crude producing field will be fully returned to Indonesia in 2021 and will be managed by state-owned oil and gas company Pertamina after being managed by a foreign company since 1931.

Regarding agrarian reform policy  which will be implemented in several stages – the President said that the Government has prepared 12.7 million hectares of land to be returned or handed over to the people.
(BPMI / EN)