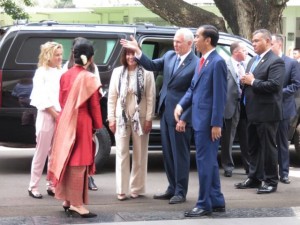 According to President Jokowi, this visit is also a meeting with the US new administration. Prior to the visit, the President has communicated with President Donald Trump since last January.

After a photo session and a veranda talk, President Jokowi and Vice President Pence delivered their press statement.

According to President Jokowi, on their meeting, they discussed a number of bilateral and international issues. First, the commitment of the US in enhancing strategic partnership with Indonesia that will focus on cooperation and investment sectors.Next month, there will be a team to discuss trade arrangement and bilateral investment based on win-win solution principles, the President said.

Second, the President added, as a country with the largest muslim population and third biggest democratic countryin the world, Indonesia also agreed to enhance cooperation in peace sector.

On that occasion, President Jokowi sent his regards to President Donald Trump through Vice President Pence.

Mike Pence and Karen Pence as well as their daugthers arrived at Halim Perdanakusuma Airport, Jakarta, on Wednesday (19/4) at 11.30 p.m. Western Indonesian Time.  They traveled by the presidential plane United States of America number 80002. Vice President Pence was welcomed by Minister of Foreign Affairs Retno Marsudi and Minister of Energy and Mineral Resources Ignasius Jonan.

Besides meeting President Jokowi, Mike Pence is also scheduled to have a bilateral meeting with Vice President Jusuf Kalla as well as to visit Istiqlal Mosque and have a dialog with inter-faith figures. In addition, Vice President Pence is also slated to have a meeting with the Secretary General of ASEAN on the series of event to commemorate the 40th anniversary of the US-ASEAN relations.

On Friday (21/4), the US Vice President as well as Vice President Jusuf Kalla are scheduled to witness the signing of MoU after delivering a remarks at the opening of the US-Indonesia Business Meeting at Shangrila Hotel, Jakarta. (GUN/AGG/ES)(MMB/YM/Naster)