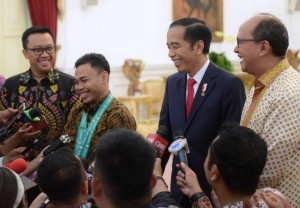 I hope that we will continue to earn achievements like this. Not only in weightlifting, but also in other sports, to continue what have been achieved at the 2018 Asian Games, the President told the reporters.

According to the President, the Government commits to give its support through Ministry of Youth and Sports and PABBSI. The Association is also expected to bring their athletes to participate in every available competition and championship.

On the occasion, President Jokowi said there will be a separate talk to discuss the possibility of giving a bonus to Eko Yuli.

For the record, in the World Weightlifting Championship in Asghabat, Turkmenistan, Indonesian lifter Eko Yuli won a gold medal in the 61-kg class. He also broke the world record with a total of 317 kg (the previous record were 313 kg), with details of 143 kg in snatch category and 174 kg in clean and jerk category. (DNA/RAH/ES)