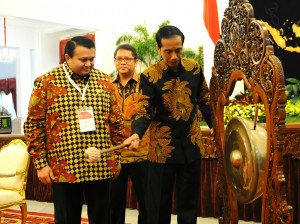 President Jokowi marked the beginning of the 2015 National Public Relations Convention, at the State Palace, Jakarta, on Wednesday (18/11)

President Joko Jokowi Widodo said that Indonesia is  now facing an extreme media transformation, along with its extreme speed.

We noted that we do not only read the news through mainstream media, such as newspaper, magazine, television and online media, but now new issue appears every second as well.

President Jokowi asserted that the condition changes so fast, so fast that public relations officers must keep digging informations. We must follow what is happening and what is the current trending topic. Unless, we will lost in the conversation because informations changes every second.

According to the President, there are more varieties in media channel and we live in social media era which has different social networking from 10-20 years ago.

The President later mentioned that everyone can make their own web and they can share informations. However, sometimes we do not know the accuracy of those informations, we could get wrong information if we are not careful.

Therefore, the President reminded public relations in every company and ministry to be careful because if we get wrong information, it will lead to a wrong result.

President Jokowi also said that we are now facing varieties of information because we could get news and information via social networking. Most of the information is correct, but there are incorrect information too.

Therefore, it is horrifying when hatred is spread through hateful informations and leads to horizontal conflict, as well as leading people to do something bad, the President said while mentioning that we are going to fight against those kind of threats.

We must prepare the words and a group who are capable of countering incorrect information in every company, ministry or even country.

On that occasion, President Jokowi also reminded all that the flow of information is extremely fast and real time, along with its variety of interests, including political, economic, business, individual and group interests.

The President also said that public relations must read the information deeply to avoid making a mistake in leading public opinion.

The Public becomes more vocal in criticizing, they will not directly believe what we are saying. They can criticize and calculate the information. This is such a great lesson to make sure whether the information is true or false, President Jokowi said.

According to the President, the demand to have a transparent dialog is getting bigger and could not be blocked, because we can not block the information.

Previously, we used to have power in mainstream media, but we could not do that anymore. No matter how we tried, we could not block the information on the media, we never can. That will be faced by the world in the future, the President said.

Therefore, President Jokowi said, in that context, there is no other way to build trust and reputation rather than conducting a dialogic communication, not a monolog.

The President reminded all that the dialog is easy to say but it requires patience and time. It also requires a capability to listen, because sometimes listening is hurt because it is nonsense.

Dialog is the only way for us to listen to peoples voices and demand. Through the dialog we can admit and appreciate the existence of others, and could build trust with others, President Jokowi said while mentioning that he considers listening to others is really needed. (FID/RAH/ES) (RAS/EP/YM/Naster)