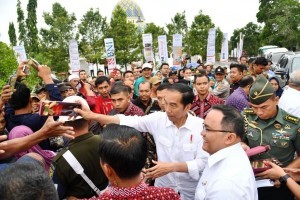 According to the President, the cost of the rejuvenation will be covered by the Government, and it includes the seed for corn crops.

The President also pledged he would go back to the plantation a year later or in the beginning of 2019 to monitor the developments. If you work with me, I will obviously check it. Have you made progress or not? Ill check everything, President Jokowi said.

President Jokowi went on to say that, after South Sumatra, the rejuvenation program will also be done in North Sumatra, Jambi, and Riau.

This year, we will concentrate on Sumatra Island first. Afterwards, we will turn to Kalimantan. Indeed, we want to be focused on our works so it will be easy for checking and controlling, the President said.

President Jokowi further said that the Government targeted that palm oil plantation owned by the people can produce up to 8 tons/hectare per year. Therefore, the President called on to take care of and nurture the seeds that are already provided. If private sectors or companies can do this, farmers should also be able to do this, President Jokowi said.