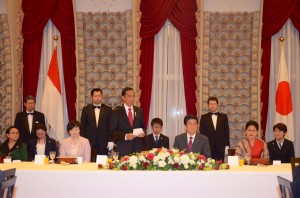 President Jokowi delivered a speech at the official banquet at the residence of the Prime Minister of Japan, in Tokyo, Monday (23/3) night

In his speech, President Jokowi on behalf of the government and people of Indonesia thanked profusely for the warm welcome of Prime Minister Abe and the Japanese government to him, the Ministers, as well as Indonesian delegation.

President Jokowi said that in next April, diplomatic relations between Indonesia – Japan will be aged of 57 years. “Relations between the two countries are very close and very harmonious, for that we nurture that this cooperation is more increasing,” he said.

On that occasion, the President Jokowi convey the decision of the Indonesian Government provide free visas to tourists from Japan. “So we want to have a lot of tourists from Japan to Indonesia, Bali, Jakarta, Raja Ampat in Papua, Bunaken Manado, and Bukit Tinggi in Sumatra,” he said.

Jokowi President also thanked, on the decision of the Government of Japan, which also has provided a free visa for Indonesian citizens who visited the State of Japan.

“I believe that the friendship between Indonesia and Japan will improve the well-being, not only the people of Japan and the people of Indonesia but also for regional and even international level,” President Jokowi said.