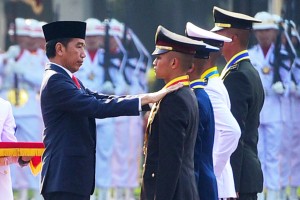 President Jokowi pins Adhi Makayasa stars to the best graduates of the National Defense Forces (TNI) and the National Police (Polri) academies, at the front yard of the Merdeka Palace, Jakarta, Tuesday (16/7). (Photo by: Rahmat/PR)

President Joko Jokowi Widodo encouraged young officers, who graduated from the National Defense Forces (TNI) and the National Police (Polri) academies in 2019, to always keep abreast of the rapid development of technology in their tasks to guard the nation.

The President also reminded them to never let the country down.

“Don’t ever disappoint the Indonesian people and the Unitary State of the Republic of Indonesia,” President Jokowi said during the Inauguration of TNI and Polri young officers, at the front yard of the Merdeka Palace, Jakarta, Tuesday (16/7).

The young officers, according to the President, are guardians of the future of this nation, adding that the glory of Indonesia needs to be achieved with hard and smart work.

The President further stated that the challenges ahead are tougher and science and technology develop extremely fast. The 4.0 Industrial Revolution, he said, has resulted in new technologies that change ways of life and create new types of crimes as shared challenges.

Since the challenges have changed greatly, the President stated, the way people deal with them must also change and the old ways can no longer be used.

“There is no other choice but to be fast, flexible, and smart. We must continuously master science and technology,” President Jokowi stated, adding that in the military, there must be extraordinary developments in strategies, tactics, doctrines, and weapons systems.

The President also urged the police to be more sophisticated in combating digital crimes, enforcing law, maintaining security and order, and protecting people and society, adding that all those challenges must be dealt with in fast, smart, precise, and professional manners and with mastery in science and technology.