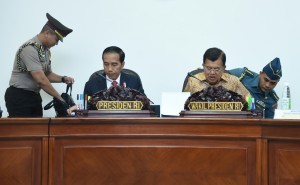 President Joko Jokowi Widodo affirmed that the Government work in 2017 is focused on reducing inequality between regions and overcoming social inequality.

In this regard, the President believes that an even distribution of the State Civil Apparatus (ASN) can give people access to better public services, and employment opportunities are not only increasing but also even across the country. “Do not let the people in remote areas, border areas, outermost islands experience a shortage of ASN, whereas in another region, the excess prevails,” President Jokowi said in his introduction at the Limited Meeting on Advanced Management Discussion of ASN, in the Presidential office, Jakarta, Wednesday (18/1) afternoon.

President Jokowi asked the Minister of the Empowerment of State Apparatus and Bureaucratic Reform to recount in the distribution of ASN throughout the country, so it is clearly visible the number and qualifications of ASN that need to be added and reduced in each region. “We should be able to find a proportional number of ASN with regard to the number of the population, the financial capacity of the state, as well as the development of information technology progress towards an e-government based system,” President Jokowi said.