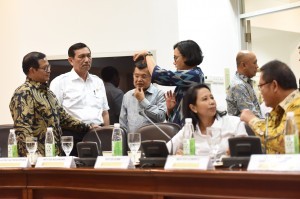 Vice President Jusuf Kalla is having a discussion with Coordinating Minister for Maritime Affairs, Minister of Finance, and Cabinet Secretary before a limited cabinet meeting at the Presidential Office, Jakarta, Tuesday (24/1) (Photo by: JAY/Public Relations Division)

President Joko Widodo (Jokowi) said although Indonesias National Soccer Team (Timnas) Garuda was temporarily out of international tournaments due to a FIFA (world soccer body) ban, the Team managed to reach the final of the AFF Cup and this achievement, the President said, has encouraged the sport to rise again in Indonesia.

Therefore, the Government will continue giving attention to speed up the development of the countrys soccer. However, we have to note that development of other sports will also be continued, the President said during a limited cabinet meeting on the Acceleration of National Soccer Development at the Presidential Office, Jakarta, Tuesday (24/1).

President Jokowi said soccer is not just a sport that most Indonesians love, but it is also a reason for the nation to stay united.

On that occasion, President Jokowi revealed the Governments four main targets to be achieved to accelerate the development of soccer.

First, the development of sport should be done to get new young talents. We cannot hope too high  aiming for the regional or even world levels  but forget to build the young talents, the President said.

For that purpose, President Jokowi instructed Minister of Education and Culture as well as Minister of Research, Technology, and Higher Education to provide soccer trainings at schools, to add the number of soccer academies, and to promote competition for young children.

Secondly, the system and management of national football must be revamped in order to create more competitive competition with a higher quality that upholds fair play. According to the President, a good competition system would give birth to new talents from various regions. I have received many reports from Chairman of PSSI (Soccer Association of Indonesia) and we remain optimistic with the system and procedures that were going to continue improving, I believe that Indonesias football will be better in the future, the President said.

Third, soccer clubs all over Indonesia must be well-managed. Therefore, President Jokowi will ask for inputs from PSSI and listen to the aspirations from PSSI.

Fourth, Indonesia must prepare infrastructures or training centers for the development of the countrys soccer.

President Jokowi has instructed Minister of Youth and Sports to make sure that soccer fields all over the country can be immediately fixed and maintained as public spaces. We must not let fields to be used for other purposes, let alone for commercial purposes. In fact, we should have more fields, the President said, adding that more participation of state-owned enterprises in this soccer development is expected.