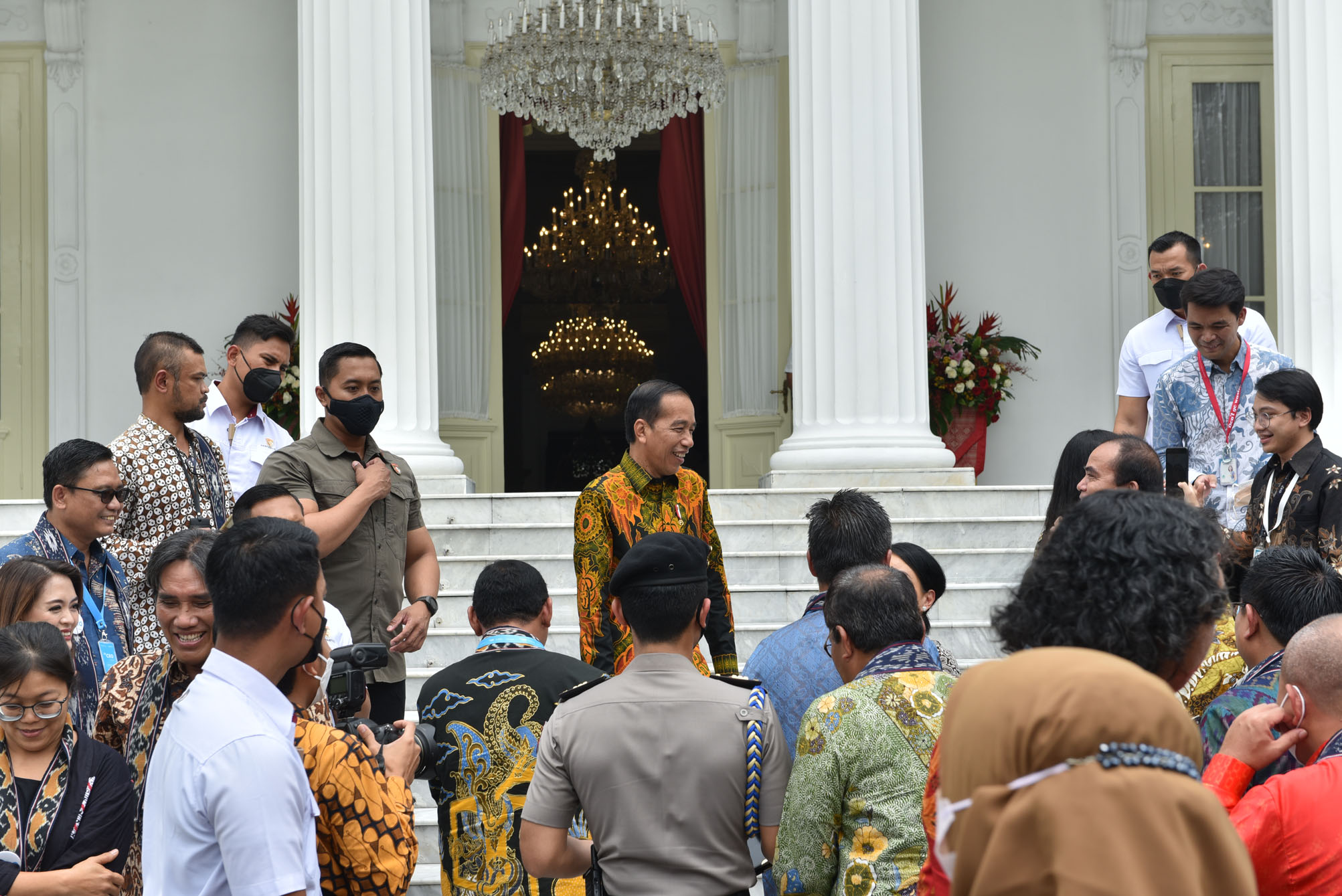 President Jokowi Friday (12/2) with participants of the 2022 Kompas100 CEO Forum, at the Merdeka Palace, Jakarta. (Photo by: PR/Oji)

President Joko “Jokowi” Widodo has once again underscored that the Government is seriously implementing a grand strategy for the country’s economy by designing an electric vehicle (EV) ecosystem.

According to the President, Indonesia has almost everything needed to create such ecosystem.

“[We will] create a large ecosystem so that other countries will depend on us because we already have nickel, copper, bauxite, and tin. We have enormous potentials,” President Jokowi said in his keynote speech at the 2022 Kompas100 CEO Forum, at the Presidential Palace, Jakarta, Friday (12/2).

The President also cited the examples of Taiwan and South Korea as success stories in developing chips and electronic component industries respectively.

“They made major companies in the US depend on them,” he said.

“On creating an EV battery ecosystem, we only lack lithium reserves, we don’t have them. Yesterday, I said to the Australian PM Albanese, ‘Australia has lithium, can we buy it?’ Australia said ‘Go ahead’. It turns out that some of us already have the mines there. This is strategic. We intervene so that the large ecosystem which we want becomes possible,” he stated.

The Head of State added it is a challenge to integrate these materials as they are scattered in several different areas in Indonesia, such as copper in Papua province and Sumbawa island, nickel in Sulawesi island, and bauxite in West Kalimantan and Riau Islands provinces.

“It is not easy to integrate these materials and create the ecosystem. This is what I seriously want to make possible so we can leapfrog toward another civilization. I am really serious about this,” he asserted, adding that investment will come by itself to Indonesia if the EV ecosystem is finally created.

The President went to say that Indonesia is open to investors as long as they cooperate with Indonesian private companies and SOEs to ensure technology transfer.

“If it is created, believe me, I estimate that in 2026, 2027, we will see this leap. The investors will come in as in the future of the automotive industry, electric motorcycles and cars will replace maybe more than 50 percent of the existing market demand. This is what we have to seize. As soon as it is created, I did the math yesterday, I calculated around 60 percent of electric cars, EV will depend on our EV battery, 60 percent of the world’s market share. This is our great strength later, just like the digital components and chips I mentioned earlier,” he said.

“We have disbursed Rp468 trillion for the Village Funds for six years, meaning the circulation of money in the 74,800 villages that we have will also increase. There will be more and that will inevitably increase the welfare of the community. I think this is justice,” he concluded. (FID/UN) (FI/HD/EP)