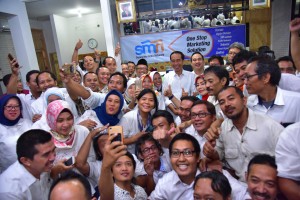 President Joko Jokowi Widodo revealed the secret of his health despite his hectic schedule. He consumes herbal drinks consisting of 80% curcuma and 20% ginger regularly every morning on an empty stomach.

I have been drinking it regularly for the past 17 years, President Jokowi said to editors of Suara Merdekathe biggest market share newspaper in Central Java provincewhen visiting their office in Semarang, Central Java, Saturday (2/2).

According to the President, curcuma contains tons of health benefits especially for human digestive system. Besides the herbal drink, the President added that he also drinks green coconut water three times a week for the last 3 years. Other tips for maintaining health, the President continued, is to jog twice a week.

The President went on saying that he used to work hard during his time as an entrepreneur.

I used to work long hours with only 1-2 hours sleep every day, the President said.

However, the most important thing to stay healthy, according to President Jokowi, is to control emotions when dealing with problems and challenges. (DNS/OJI/ES)