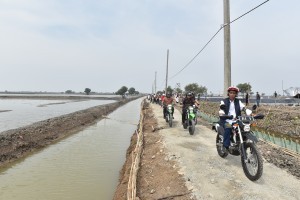 Previously, President Jokowi handed over a land certificate to recipients of Social Forestry Program in Pantai Bahagia Village. The President then departed to the ponds located about two kilometers from the first location.

President Jokowi gave advise to create a large group of pond farmers with a corporate pattern. “It means, it must be economic, big  scale so that the project is bankable,” the President said.

To that end, the President went on to explain, the Government will educate people on ways to farm shrimp in a modern way and feed it with e-fishery or automatic feeder, which can be controlled with android. The installation of plastic and the mill is also conducted in a modern way.

“Otherwise, one hectare only produces 3 tons, whereas one hectare should produce 4 to 5 tons,” the President said.

If it can produce 5 tons, then it means the method works. And this is what the Government will do in the future, not just business models in pond farmers, but later for others such as rice farmers and horticulture.

The Government, the President further explained, will support the infrastructures, so that the road can be passed by car when it is harvested. The harvest later will be sold for export. “The functions of private and state-owned enterprises are as off taker,” the President said.

President Jokowi mentioned that this shrimp export market is very large. Now, Indonesia ranks three worldwide. “So if all ponds in Lampung, in Java are combined, we can be number one but it must be conducted in a modern way like this,” the President concluded.