President Jokowi Says He is Unperturbed by Death Threat Against Him 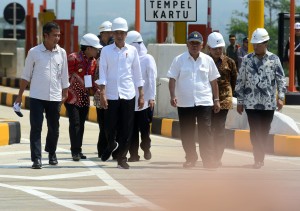 In response to a death threat from a rally participant, President Joko Jokowi Widodo stated he was not disturbed by the threat.

According to the President, he has handed over the case to the police.

Im not disturbed (by the death threat). This is a fasting month. We all have to be patient. Let the police continue the legal process,” President Jokowi said in Malang, East Java, Monday (13/5).

A 27-year old man, identified as HS, said that he would behead the President during a rally in front of the office of the Elections Supervisory Body (Bawaslu). His action was recorded in a video that went viral in social media several days ago.

The police officers then soon arrested the man at his brothers house at Bogor Regency, West Java, Sunday (12/5). After the investigation, the police named him a suspect and detained him at the Metro Jaya Regional Police. (DNA / RAH / ES)