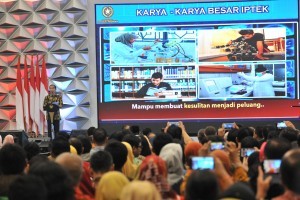 President Joko Jokowi Widodo encouraged Indonesian scientists to face the challenges and strive for innovation. The President cited some examples of the worlds rapid change, including the Netherlands, a small country that becomes a food exporter, and facebook, the most popular media in the world that does not have any editor or reporter and never makes any news content.

“The biggest taxi company in the world, Uber, does not own a single car,” President Jokowi said in his remarks in the opening of the 2018 Indonesia Science Expo (ISE) at Indonesian Convention Center (ICE) in Serpong, South Tangerang, Banten, Thursday (1/11).

President Jokowi further said that the world is changing rapidly and science, technology and innovation make everything possible; therefore, he encouraged the scientists to make the impossible possible, to make life easier, and to take Indonesia to the next level.

President Jokowi went on to say that the Government regulation is not enough to solve the modern problem. The important thing, according to the President, is high standard of morality combined with advanced technology, and research institution plays a strategic role in this matter.

“We should understand the problem. In every situation, research institution plays a central role in human life and their environment to provide high quality research and to cope with new challenges, the President said.

President Jokowi further said that research institutions should support national development based on science and technology. For this reason, according to the President, cooperation with the Government, educational institutions, industry and other strategic partners is needed.

For the record, ISE 2018 is an event that shows the research products as part of contribution to the development of science, technology and knowledge in Indonesia. ISE is held for 4 days from 1 to 4 November 2018 and includes exhibitions, 12 scientific conferences, 26 workshops and talk shows, 10 science shows, youth science and innovation fair, 6 science films and science art.