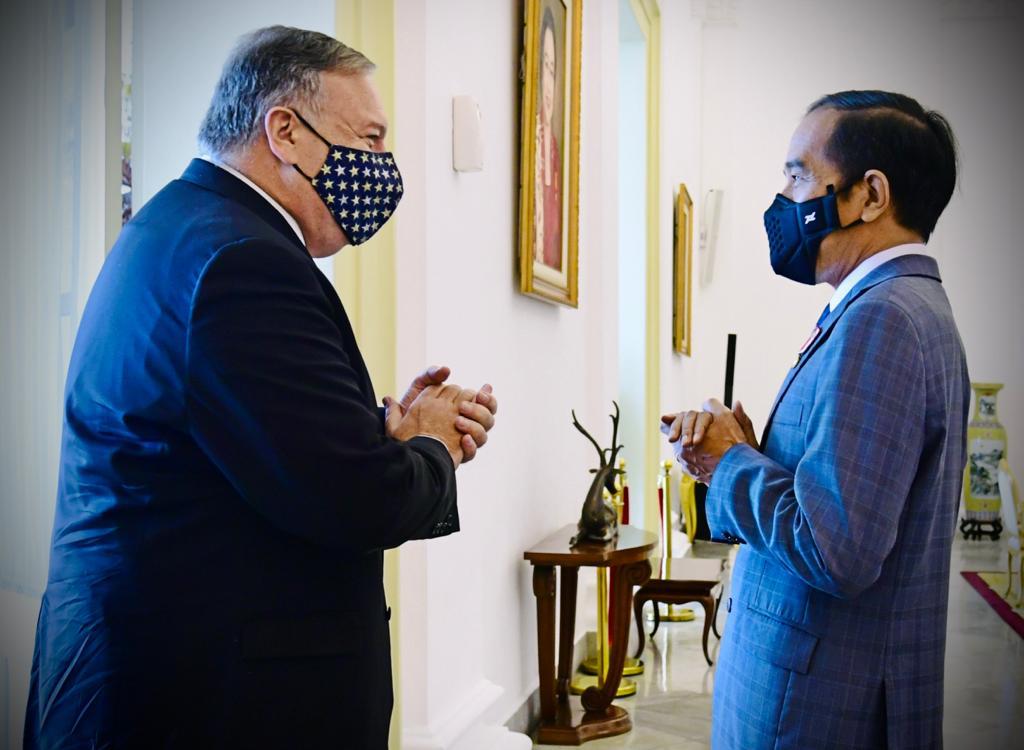 “Your visit in the midst of this pandemic shows the importance of the strategic partnership between Indonesia and the United States. And, during the pandemic, the visits between our officials are quite intensive. I can even say the most intensive ones,” President Jokowi said during the bilateral meeting.

Previously, Indonesian Minister of Defense Prabowo Subianto paid a visit to the United States to meet his US counterpart, Secretary of Defense Mark T. Esper. Meanwhile, US Undersecretary of Defense for Policy James H. Anderson and delegation of the US Development Finance Corporation (DFC) also visited Indonesia.

As stated by Indonesian Minister of Foreign Affairs Retno LP Marsudi in a meeting with Mike Pompeo, President Jokowi expressed his commitment to partnering and fostering friendships with the US. “Indonesia wants America to be the true friend of Indonesia,” Retno said quoting the President’s statement.

“The President said that to maintain this partnership, serious efforts and mutual understanding are essential. Efforts are also needed to realize concrete cooperation, including economic cooperation,” she said.

In economy, Retno went on to say, the President emphasized that Indonesia aspires to have increased cooperation between the two countries in the future, including extending the GSP (Generalized System Preference) facility to Indonesia.

The President, Retno said, also aims for increased cooperation in the defense sector. She added that the President expressed hope for the US understanding of the interests of developing countries as well as Muslim countries.

“The President also said that Indonesia wants the US to understand Southeast Asia and, together with Southeast Asian countries, to create peace, stability, and cooperation in the region,” the Minister stated.

Meanwhile, on the Secretary of State, Retno said that he expressed his joy to be able to visit Indonesia. The Secretary, she added, also stated the US’s strong commitment to continuing the strategic partnership with Indonesia, including in the economic sector. The US, Retno said, will encourage more entrepreneurs to have economic engagement with Indonesia which plays a role as the anchor of ASEAN.

“Therefore, due to Indonesia’s crucial role, America really wants to forge a better relationship with Indonesia, of course, including the cooperation in the economy and defense sectors,” the Minister said.

The Secretary, according to Retno, also said that besides establishing good relations at the government level, there is also an intention to establish good relationships and communication with grassroots and stakeholders in Indonesia. For this reason, Pompeo will attend an event hosted by GP Ansor, a youth wing of the largest Muslim organization in Indonesia Nahdlatul Ulama.

The Secretary of State, Retno continued, also expressed his appreciation for Indonesia’s role on Afghanistan issue. “Indonesia and the United States as well as several other countries have continued to work together from the start, to contribute to bring peace in Afghanistan,” she said. (FID/DND/UN)