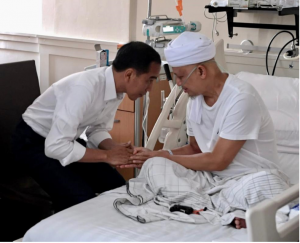 Picture of President Jokowi visited Arifin Ilham when he was hospitalized in RSCM, Jakarta, months ago (Photo: Twitter @jokowi)

“May he rest in peace and God grant strength to the members of the bereaved family,” the President added.

The 49-year-old preacher passed away in Penang, Malaysia on Wednesday (22/5). He was diagnosed with nasopharyngeal and lymph cancer stage 4A and went an intensive treatment in Gleneagles Hospital, Penang, Malaysia. He will be buried around Az Zikra Gunung Sindur mosque area in Bogor, West Java. The funeral was held Thursday morning at Pondok Pesantren (Islamic boarding school) Al-Quran and Sunnah Az-Zikra (PPASA). (ES)