President Jokowi Sets Target to Have Karian Reservoir Completed by 2019 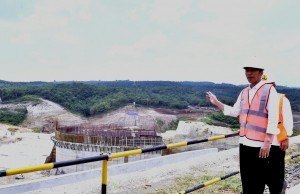 President Jokowi explained that the development of Karian Reservoir, which is the third largest reservoir in Indonesia, has been planned since the 80s and included in the national strategic project. However, the plan was executed just in the last three years. “Karian Reservoir has been planned since the 80s. Then, the construction has been started since three years ago. This reservoir is the third largest reservoir after Jatiluhur and Jatigede,” the President explained.

“It is dammed from the Ciujung River and Ciherang River. We hope that this reservoir can irrigate approximately 22,000 hectares of land in Banten Province and become raw water for the Provinces of Banten and Jakarta. It also becomes a hydro power plant,” the President explained.

For the record, in Banten itself, the Government is building two reservoirs. In addition to Karian Reservoir, Sindang Heula reservoir is also built in Serang City which is also included in the national strategic project.