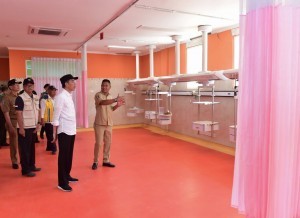 Previously, all hospital services were temporarily run in emergency tents in front of the hospital building following the quake that hit the region some time ago.

The President also inspected a number of makeshift tents where the patients were receiving treatment and asked his ranks to expedite the renovation process.

“I have ordered (related officials) to renovate it soon. State-owned construction company PT. Hutama Karya stated that it will take two months to complete the renovation,” the President said, adding that the Government is giving a top priority for the renovation of the hospital as well as a number of other hospitals affected by the quake.

“I notice that the affected hospitals suffer from light to medium damage but this is indeed very urgent. It needs to be renovated immediately so that patients are not stranded outside the hospital or in makeshift tents,” the President said.

President Jokowi went on to say that the same renovation process and targets also apply to damaged school buildings and affirmed that he would continue monitoring the course of the renovation up to next two months.

“I will visit Lombok again in the next two months and the renovation process must be completed in two months,” the President concluded.